Comments on the loonie decison of the North Bay manager 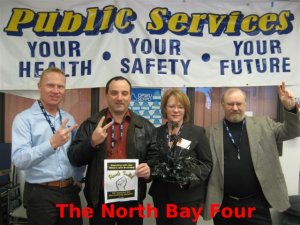 It is ludicrous (absurd or ridiculous) that the 4 PPO’s from North Bay P & P were cited with 3 bogus allegations when they clearly were engaged in positive meetings with important stakeholders in our duties as PPO’s. If this is how management wants to conduct themselves it does not bode well for future relations. They(management), should be ashamed of their conduct while the PPO’s singled out should be proud of their commitment and focus on creating a better working relationship with such important stakeholders as the court. This PPO fully supports these North Bay brothers and sisters. Collin Lee Orillia P&P

News from around the Province

Article from Rapsheet3
A number of PPO’s at the North Bay P&P office attended the North Bay Court yesterday whereupon they engaged in lawful and meaningful PPO work. Acting as “Agents Of The Court,” a lot was accomplished with their meetings with the Judiciary, JP’s and various other judicial stakeholders at the Court.
Upon returning to the office, the Area Manager dispatched a threatening e-mail to the PPO’s advising that Management was investigating their actions and would be in contact with them shortly to discuss the matter.
The e-mail was b.c.c.’d to the effected PPO’s and was sent as a form letter. At no time was any PPO directly questioned about their action, the PPO’s were not afforded the opportunity to speak nor respond to the strongly worded and accusatory e-mail/statement, the operations of the office were not negatively impacted and without any further contact/communication with the effected PPO’s, they received a personalized letter from their Manager today advising them that the Employer has arbitrarily deemed them to have been at Court without the express permission of their Manager and that the Employer will be deducting a day’s wages from each of the PPO’s.
Let it be known that each of the effected PPO’s all signed out on the office’s in/out board clearly indicating that they were at Court. At no time did the Manager ever contact the PPO’s at Court, which would have been easily done as there was a CLO in Court all day Tuesday who had an office cell. phone and P&P computer with e-mail. Further, the effected PPO’s kept in contact throughout the day with the office via both the Support Staff and the Duty PPO back at the office.
This was not a job action. It was a day of Solidarity where the PPO’s wanted to engage the Judiciary & Judicial Stakeholders in a meaningful and productive manner where their goal was to improve their working relationship with the Court personnel. Despite the PPO’s accomplishments at Court, the Northern Region Mgmt. team has, once again, taken the adversarial approach to the dedicated work and team building that the PPO’s in North Bay continue to foster.
Is the Northern Region Mgmt. Team that threatened by the strong showing of Solidarity of its PPO’s?
This is the same Mgmt. Team that single handedly disbanded the Northern Region ERC Team back in ’08.
You know, it’s funny how things seem to have gone to ‘Hell In A Hand Basket’ in the North ever since Northern Region’s Former RD, Jim Adams, moved on to better pastures and the new (not improved) RD took over.

We had a week of action in Thunder Bay with a special task suggested for staff each day. On Wednesday, our Brothers and Sisters from the two jails (TBCC and TBDJ) came by our government building for a lunchtime information picket.

Approximately 12 PPO’s joined for varying periods and we waved our signs high. There was some divine intervention when one of our two acting ass’t a.m.’s pulled up unsuspectingly and found herself facing our welcoming committee. A friendly and persuasive discussion took place and this actor agreed to step down by the end of the week. Will let everyone know on Tuesday if she is true to her word. It was a great show of strength and solidarity and certainly caused much activity with management who were kept busy writing incident reports. Thanks to everyone who participated.

They parked along Settlers Road, south of Tracey’s Hill Road, near Maryland Farms where the Premier met with the farm’s owners and media to discuss the upcoming Green Energy Act. They carried placards, a couple of OPSEU flags and used a bullhorn to get their message across but made no attempt to enter the property.

“With Dalton in our area, it was an opportunity to let him know we’re out there,” Laurie Sabourin told The Lindsay Post. Sabourin is president of Local 368 of the Ontario Public Service Employees Union, which represents 6,000 workers including probation and parole officers and the corrections officers at the Lindsay Central East Correctional Centre on Highway 36.

The members have been negotiating a new contract with the province since Nov. 4 of last year. The sticking point has been sick time. Sabourin said the union has offered to bring absenteeism down.

She said the government has calculated that on average, a correctional officer takes 21 days a year off in sick time. She attributed the high number to the high stress in the job.

Regarding the absenteeism, she said that “we don’t believe it’s a collective bargaining issue, but a labour-relations issue.”

She said negotiations will continue, adding, “we don’t believe that we need to go on strike to settle this issue but if we have to we will.” She noted, however, that the corrections officers “can’t just walk off. There are some essential services that we will perform.”

The government recently settled a contract agreement with 38,000 OPSEU workers.

NAME : OPERATION SARDINE
DATE : MONDAY FEBRUARY 9th ,2009
LOCATION : KINGSTON ,ONTARIO
OUR MISSION : TO SNEAK IN TO THE KINGSTON P&P OFFICE AND INTEROGATE NANCY WILLS (THE AREA MANAGER) FOR AS LONG AS WE CAN.
SECURITY LEVEL : TOP SECRET
STATUS : COMPLETE
HERE IS OUR STORY.
Monday, 09:00 our team starts arriving via different modes of transportation, one even in a (clutch less armored wagon). As more and more started arriving, I knew it was going to be hard to remain unseen until 09:30, but our team stayed invisible.
09:30 With orders in hand we stealthily moved towards 43 Beechgrove Lane , under the cover of high priced manager cars and SUV’s, we made our way successfully into the lobby of our target location.
The terror in the eyes of the ex-inmates, and staff reassured me our mission to this point had remained a secret.
While waiting for our inside contact, but out of nowhere an enemy fighter came from our left (it was Sharon H), she quickly retreated into the secure area with out a battle, she knew better.
But our cover was blown. Just then Nancy Wills appeared , a confused and concerned look on her face, all she was able to get out of her mouth was, “ahh can I help you”
Thats when we met ROBERT H. A lone commando who at that exact moment, put aside his own safety and well being to come forth ,join our team and challenge Nancy to taunt him with a job offer.
Nancy quickly snatched him up and took him into her office.
At that exact moment, I shed a tear ,the bravery this soldier had shown, at the same time we still had a mission to complete.
Robert came out with Nancy 10 minuter later, we introduced the rest of the team and it was decided that we would fight this battle in the board room.
Nancy brought the whole team into the P&P board room, we invited Robert to join us.
For the next hour and a half we grilled Nancy with Questions about her role in the Ministry of Community Safety and Correctional Services, throwing the odd comment about a STRIKE in.
Robert, threw many Questions at Nancy ,questions that even an Unclassified Correctional Officer would have known the answer to.
I must say Nancy stayed professional through out the meeting.
How ever by 10:15 she had been checking her watch, and asking “anything else” about 20 times.
Did Nancy have somewhere to be ?
Were we just wasting her time? —- Thats when we knew we had a successful mission!!!!
If the Ontario Government wants to waste our time at the bargaining table, well we can waste theirs.
Although this was to be a peaceful mission, just minutes before we departed, I got word that TJB dropped a bomb in the P&P toilet.We left the board room, both sides agreeing, a strike was not the route we should take this battle and we both agreed to report back to our leaders.
Monday 11:00 We left the P&P office knowing the team had done a great job, We kept Robert with our group.
If this young soldier showed this much bravery, we wanted him with us !!.
Being hyped from a great mission, the team took a little R&R time outside 43 Beechgrove

View of the Life of a Correctional Officer

Members of Local 368 and 337, bombarded the Adult and Youth P&P Offices in Peterborough on Monday, February 9th. Correction and Recreation officers and one of our Executive Board Members entered the unsuspecting offices to tie up the Area Manager for the morning. We packed the waiting rooms and requested to speak with the manager. The Youth P&P Area Manager talked with everone individually in his office and answered all their hard pressing questions. Members asked about volunteering, the current labour dispute, the ongoing day to day business of what P&P does among other questions. The Adult Area Manager was less receptive. He would not allow us access into the secure area of the office but it was for lack of trying. He was also annoyed of any questions which were asked of him. Thank you to all who participated today and watch your emails or this site for details on the next mission.

It’s 1989. In Ontario’s correctional facilities, tensions are boiling over. Jails in the province, especially in the GTA, are facing the worst overcrowding of inmates ever experienced. Inmates are being packed into cells with less living space than is legal for dogs in animal shelters. Fights are common. Staff are being assaulted. Conditions for those on both sides of the bars are intolerable. Finally, staff have had enough. Over a period of six days, officers stage a series of protests to try to get the government’s attention.

When the dust had settled, there was a promise from the Province of more beds, better compensation and early retirement provisions for beleaguered correctional workers.

Fast forward to 2009. After 20 years, there is the same number of beds in the system than there was in 1989, despite an increasing number of inmates. Correctional officers, who have an average life expectancy of 58 years, still don’t have an early retirement option. Previous closures of minimum- and medium-security institutions now place all Ontario inmates in the same maximum-security facilities. Conditions inside the institutions are still intolerable. Diseases such as hepatitis, HIV, and AIDS are common place. Many of our institutions are over 100 years old. Mould is common. Plumbing problems are common. Ventilation is almost non-existent. Colds and flu spread throughout the facilities because, quite frankly, you can’t just throw open a window. The list goes on and on.

Continued downsizing and closures of mental health facilities has resulted in those with psychiatric problems being warehoused in jails. In most facilities, the number of inmates and youth with mental health issues range between 20-30 per cent or higher. Despite all this, correctional officers in our adult facilities and youth workers supervising young persons do a remarkable job in running the facilities and keeping the public safe. So 20 years later, where are we? We are experiencing déjà vu while the problems continue to be ignored.

In 1989, we were fortunate that a full scale riot didn’t occur in one of our facilities. We can only hope against hope that we are lucky again. But should our correctional system depend on luck?